MARY JANE DOUGHERTY MULTI-MEDIA.COM
Search
Meet Mary
Greetings and Salutations to all of you. This is a fun way to connect with you through my writing and producing and background acting. 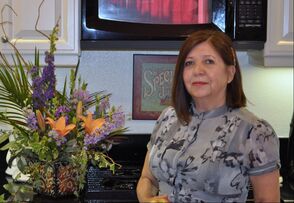 In 1952 the average price of bread was $.16. Going to see a movie cost $.54. The average price of gas was $.27 a gallon. That was the year I was born in Anchorage, Alaska when, Alaska was still a territory. My father was Greek, worked on and retired from the Alaska Railroad. That is where he met my mother, who was born at the Athapascan Indian Village at Point Possession, Alaska. She was half Athapascan and half Swedish.

Growing up in Anchorage with 7 older siblings was quite adventurous not only living in Alaska with the snow and cold. We had our warm summers at Point Possession at my mother's commercial fishing sight. That is where I learned the love of nature, land and people. My mother was a great storyteller and told us about the life and times at our fishing village. Even the grade school, Denali Elementary where I, along with my brothers and sisters went was named after, The Dena 'ina Athapascan Indian.

Our time of flying kites, bike riding and walking downtown to our favorite movie palace, The  Fourth Avenue Theater was a special time with my family and friends. I'm sure I got my love of riding trains from my father and my love of going to the movies from my mother. (being Swedish like Greta Garbo, I suppose)

Graduated from East Anchorage High on June 1st and then married my husband Mike after dating for 3 years on June 7th also, in 1970. Mike and I met at the local television station when he was hosting a live teen dance show and I was one of the staff dancers. In 1973 we had our first child, our daughter, Nikki. In 1976 our son, Christopher. And when they each got married they each gave us wonderful granddaughters to play with and to watch as they grew up.

During the 1970's, Mike worked hard on his television career and I worked hard on raising our children. In the 1980's, Mike's career took us to the east coast and eventually to the west coast, in California where we live now. My dream of becoming a background actor in movies and television came true in 1994. I owe it all to my mother and family for the many, many times we went to the movies in Anchorage.

Reading to the children and granddaughters was always a great past time for us, we spent a lot of time at the the libraries. Our family pet when the children were growing up was named, Snoopy. I had a lot of nicknames for him and one was, Snoopy Professor of Bones. That gave me the idea to write my stories based on one smart dog. Professor Houndstooth and The Playful Pals. Further more, growing up in Anchorage, many adventures occurred such as the horrific, 1964 Great Alaskan Earthquake and the awesome unexpected visit from the Beatles.

Perhaps the personalities of my parents had caused me to be interested in so many things, like being a background actor, keeping up to date with fashion, organizing, creating dvd's and children stories. Writing is my way of story telling in a form that can be handed down and read by generations to come. Though, time has passed and bread doesn't cost 16 cents, going to a movie doesn't cost 54 cents or gas not costing 27 cents a gallon. Doesn't, deter me one bit. Such as, with some things like buying a pack of pencils and a ream of paper, well of course theirs always money in the piggy bank for that. 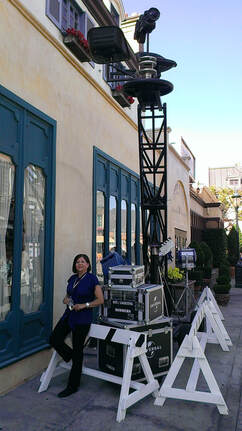 Universal Studios Front Lot
Just loved going  to the  movies and watching the actors . When I was young I had a goal to be a Background Actor in Hollywood and I reached it in 2004.

That's what a background actor needs in all kinds of weather in Southern California if you want to stay warm and dry!

Always with a good book to read and a variety of snacks, although they feed you quite well, its always good to be prepared.

Comfortable shoes are a must.

Windy that day! This photo was taken in
February and the location today was filming
at the Disney Ranch which is just 30 miles
north of Hollywood.

I was thrilled and humbled to be working there
that day because of Mr. Walt Disney, who I admired and who inspired me to start writing
and creating my projects for children.

This is my lime green 80's wardrobe.

In the picture below, I'm wearing one of my special finds, a black hat from a local antique store.

Perfect for the funeral scene that was filmed on location.

The Hair and Makeup Department raved about my hat.

A dash of entertaining fun for you and your family